The Karhunmäki project area is located in Lapua municipality within the Southern Ostrobothnia region in Western Finland, ca 80km east of Vaasa. The study area was chosen because of its high metamorphism, known coarse flake graphite findings and extensive interpreted graphite schist zones based on airborne geophysics, bedrock observations and historical drilling.

In December 2019, an Exploration Permit application was submitted for the Karhunmäki 1 prospect, covering an area of approximately 965 hectares, situated near the town of Lapua in Western Finland.

The main rock type in the region is a heterogeneous rock called Vaasa granite. It has formed from mica gneisses through melting to various degrees and re-crystallization. Eastern and southern parts of the Vaasa granite complex form part of the Evijärvi schist belt where the dominant rock types are psammitic and pelitic metasediments. Chemical compositions indicate that the Vaasa granite has evolved from Evijärvi-type metagreywackes almost isochemically. In the Lapua−Alahärmä region, the main granite rock type is unoriented and its appearance is similar to intrusive rock. Garnet and quartz aggregates are common and locally there is also orthopyroxene.

Lapua is part of the Evijärvi schist belt, which consists of migmatitic metasedimentary rocks. They are mainly psammitic and pelitic mica gneisses with graphitic interbeds. Mica gneiss, meta-cherts, graphite-sulphide schists and banded metavolcanic rocks dominate in the area and its surroundings. The schist belt also contains several small tonalitic and granitic intrusions and minor volcanic-sedimentary interbeds.

The graphitic interbeds have formed by re-crystallisation and have mostly been mobilised into thin and irregular veins or layers. The main target area (Karhunmäki/Kiviniemi) consists of irregular fold and deformation structures, which could potentially contain small or even large scale re-mobilised graphite lenses/layers. There are also geophysical indications of possible enriched conductors in the area. 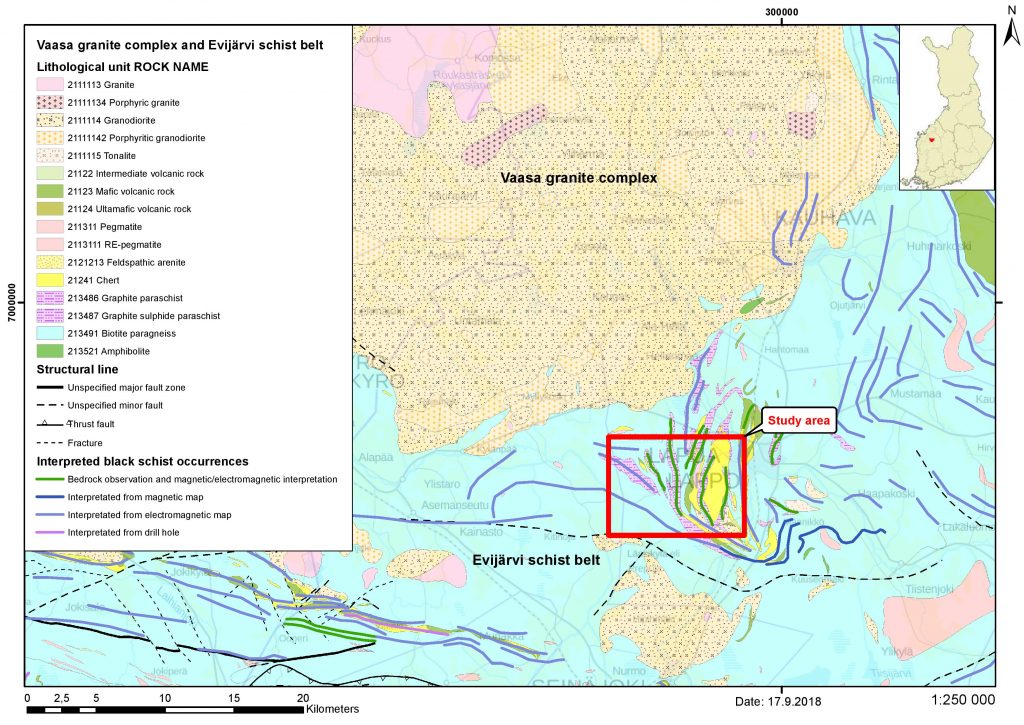